3 Easygoing Jam Music Festivals to Check Out in 2019

Festival season is almost upon us. As Coachella will likely be filling up your Instagram feed come April, it’s always a nice reminder that the festi scene is booming in the United States. There’s no denying that the giant crowds, high costs, and widely diverse music selections of Coachella, Bonnaroo, and Lollapalooza can get extremely overwhelming. Moreover, it’s nearly impossible to catch ALL the musical acts you want to see at the bigger fests.

If you want a weekend in the summer to groove out to funky jam music, there are plenty of music festivals in 2019 to get your fix – most of which won’t break your bank account.

Here are three to consider.

Summer Camp Music Festival, based in Chillicothe, Illinois, is at an interesting point in its 17-year existence. While it has always been clear that the organizers want it to remain a low-key event with a jam-focused crowd, the perception seems to be teetering on the middle ground between a small-to-medium size festival and a big, mainstream one. Year-after-year, they are able to lock down bigger acts and draw more diverse crowds. In recent years, Summer Camp has brought in household names from the jam and EDM scene including the likes of Trey Anastasio, Steve Miller, Bassnectar, Pretty Lights, and more. Each year, patrons are treated to three days of Umphrey’s McGee and Moe.

Perhaps the best part about Summer Camp is you don’t camp with your cars. This means there is no distinct separation between the camping areas and the actual festival grounds. You only go through security at the very beginning and don’t have to conceal alcohol or anything else from security when you go from your campground to a show. Basically, once you’re inside, freedom reigns. Furthermore, because the festival isn’t congested with parked cars, you are never more than a 10-minute walk from any stage. Its host, Three Sisters Park, seems to have been created for a music festival.

Summer Camp is being held this year from May 24th – 26th. If you get the pre-party pass, it starts on May 23rd. The VIP upgrade is affordable and highly recommended for this one. This gets you a ticket to the Thursday night pre-party, access to showers, nicer bathrooms, a number of shows at the VIP tent, and a show in the famous Red Barn. Not to mention, this year’s wristbands will be fully-equipped with RFID technology so festival goers can go cashless. Simply add the desired amount of money to your account ahead of time so you can pay with a scan of your wristband while at Summer Camp. Having a pre-loaded amount will help you to stay within your budget without having to take out your wallet and count your dough.  If you like festivals that are small, but not too small, Summer Camp is the fest for you.

It’s no secret that music festivals have grown like crazy in the past couple decades. As a result, many have become highly commercialized events with all sorts of brand messaging to throw off the vibe. High Sierra Music Festival, in Quincy, California, is one of the few that does its best to resist the corporate takeover.

As a veteran camping music festival in California that dates back to 1991, the tight-knit community feel of High Sierra is felt by everyone involved; the organizers, staff, and patrons. The size of this festival is very manageable and unintimidating. While the scramble to get a good camping spot can be a bit hectic (like any other music festival) you are never too far from any stage.

High Sierra frequently welcomes bands like The String Cheese Incident, Lotus, STS9, Umphrey’s McGee, and more. When it comes to jam music, High Sierra is one of the best festivals on the west side of the Mississippi.

The VIP passes get a little pricey. At the basic level, this pass gets you early entrance to get a good campground, access to a number of exclusive areas to see the stages, late shows, drink tickets, and a handful of festival memorabilia.

This 4-day festival normally takes place around July 4th weekend. This year, the dates are July 4th– 7th.  While you will definitely get some hot summer days, the nights exemplify the perfect Northern California weather. 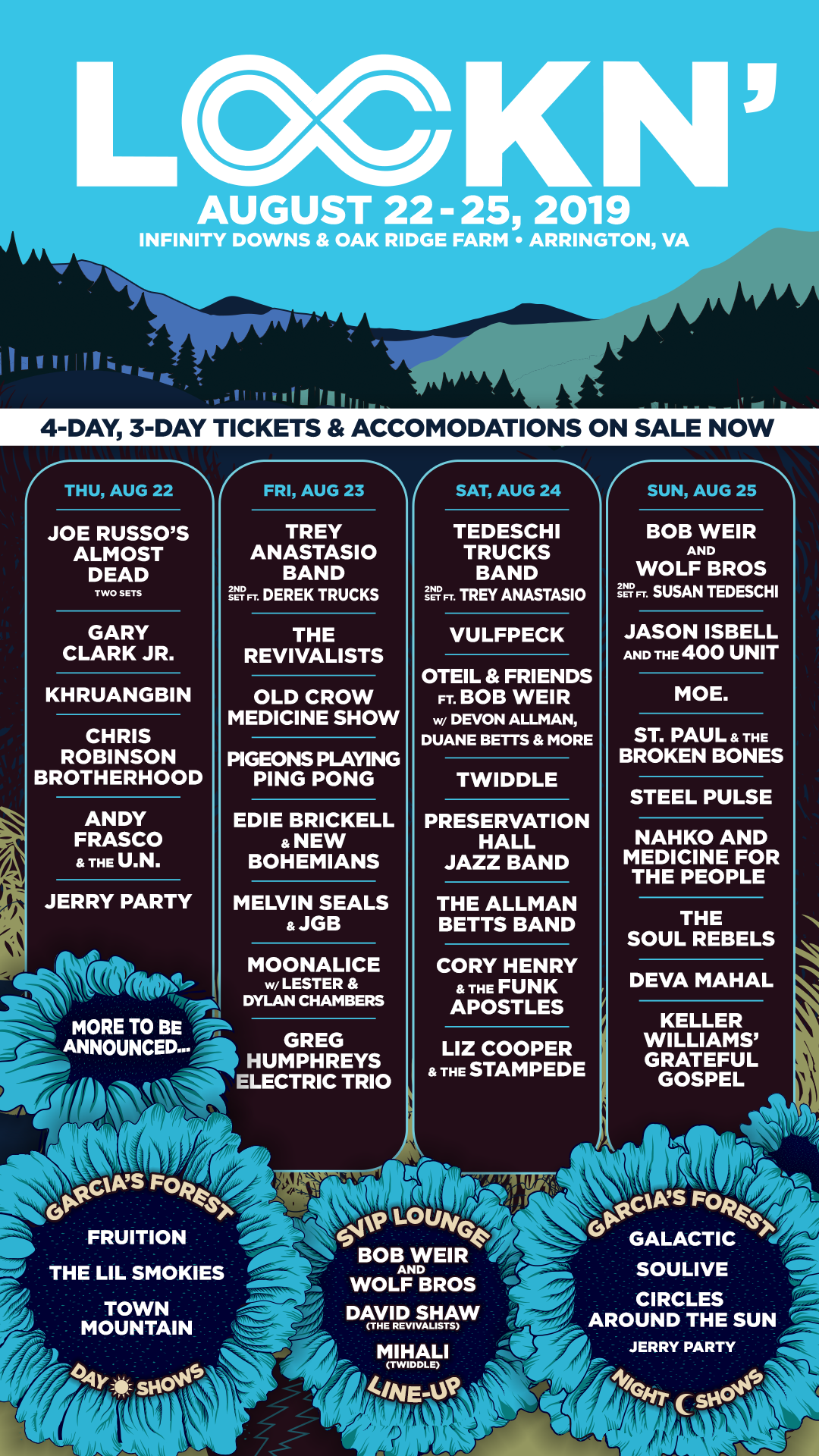 Formerly known as Interlocken, LOCKN’ is one of the newer camping music festivals on the scene. However, just because it’s a newer fest doesn’t mean it holds any punches in getting a great lineup and putting on a weekend for the ages.

While it doesn’t typically have a huge number of artists on the sheet, the festival has created a reputation for bringing in huge names. In its short existence, LOCKN’ has hosted jam legends like Bob Weir, Phil Lesh, The Allman Brothers, Phish, Widespread Panic, and many, many more.

Hosted at Infinity Downs & Oak Ridge Farm in Arrington, Virginia, LOCKN’ is a 4-day camping festival that usually takes place in late August. In addition to the heavy-hitter musicians, LOCKN’ is known for keeping the camping areas in good shape throughout the festival. The staff also does a great job in cleaning the porta-toilets on a daily basis – everyone knows how bad those can get towards the end of a fest…

This year, LOCKN’ is showcasing Joe Russo’s Almost Dead, Trey Anastasio, and Bob Weir! These legendary jam band acts make it a must-attend music festival in 2019. The fest also welcomes Moe., the Revivalists, Twiddle, and a number of the other usual suspects in the jam scene.

Going VIP will cost you a pretty penny. But the upgrades will enable you to live like a king (or queen). This includes hassle-free admission, air-conditioned bathrooms, access to the VIP lounge, Sunday brunch, merch, and more.

What Are You Waiting For?!?

Whether you are missing Coachella this year, or want your summer music festival to be a bit more jam niche, these three fests should definitely be on your radar. Perhaps the best thing about these three is they always bring in a good mix of veteran jam bands and new names on the scene.

Now, these are certainly not the only jam music festivals taking place this summer. If there is another one you feel should be mentioned, please fill us in in the comments!

Kevin is a proud Southern California transplant from the Midwest. His love of travel and writing was the inspiration to create Impulsive Wanderlust. From 9 to 5, Kevin works in marketing as a senior copywriter and content strategist. When he isn’t writing or traveling, Kevin is either rock climbing, hanging out at the beach, or seeking out his next favorite craft beer.

5 Haunted Locations in New England That Will Give You Chills