The Story Behind Norman’s Cay: Original Home of the Fyre Festival

Have you seen either of the documentaries on Netflix or Hulu outlining the failed Fyre Festival?

If you love a good trainwreck story that ends in a big ego getting shattered, definitely check them out! Seriously, both documentaries are amazing!

To give some context, the Fyre Festival was a doomed music festival that was scheduled to take place over two weekends in the late spring of 2017. It was advertised as a lux party in paradise taking place on an island “once owned by Pablo Escobar” – former leader of the infamous Medellin Cartel.

If you haven’t seen it, check out the promo video for the event on YouTube!

In the Netflix documentary, Billy McFarland, the man behind the disastrous Fyre Festival, claimed that he bought a private island in the Bahamas for $8.4 million – of which would be the home of the festival “on the boundaries of impossible.”

The real name of this island is Norman’s Cay, a location that played a momentous role in the cocaine trade of the late 1970s and early 1980s. First of all, Pablo Escobar did not own this island. This claim was one of the many promotional lies the Fyre Festival organizers spewed.

Note: Impulsive Wanderlust is a participant in the Amazon Services LLC Associates Program, an affiliate advertising program designed to provide a means for sites to earn advertising fees by advertising and linking to amazon.com.

Where Exactly is Norman’s Cay?

Norman’s Cay is a tiny, hook-shaped Bahamian island located in the Exumas about 210 miles off the Florida coast. The Exumas are a chain of small islands located Southeast of Nassau. 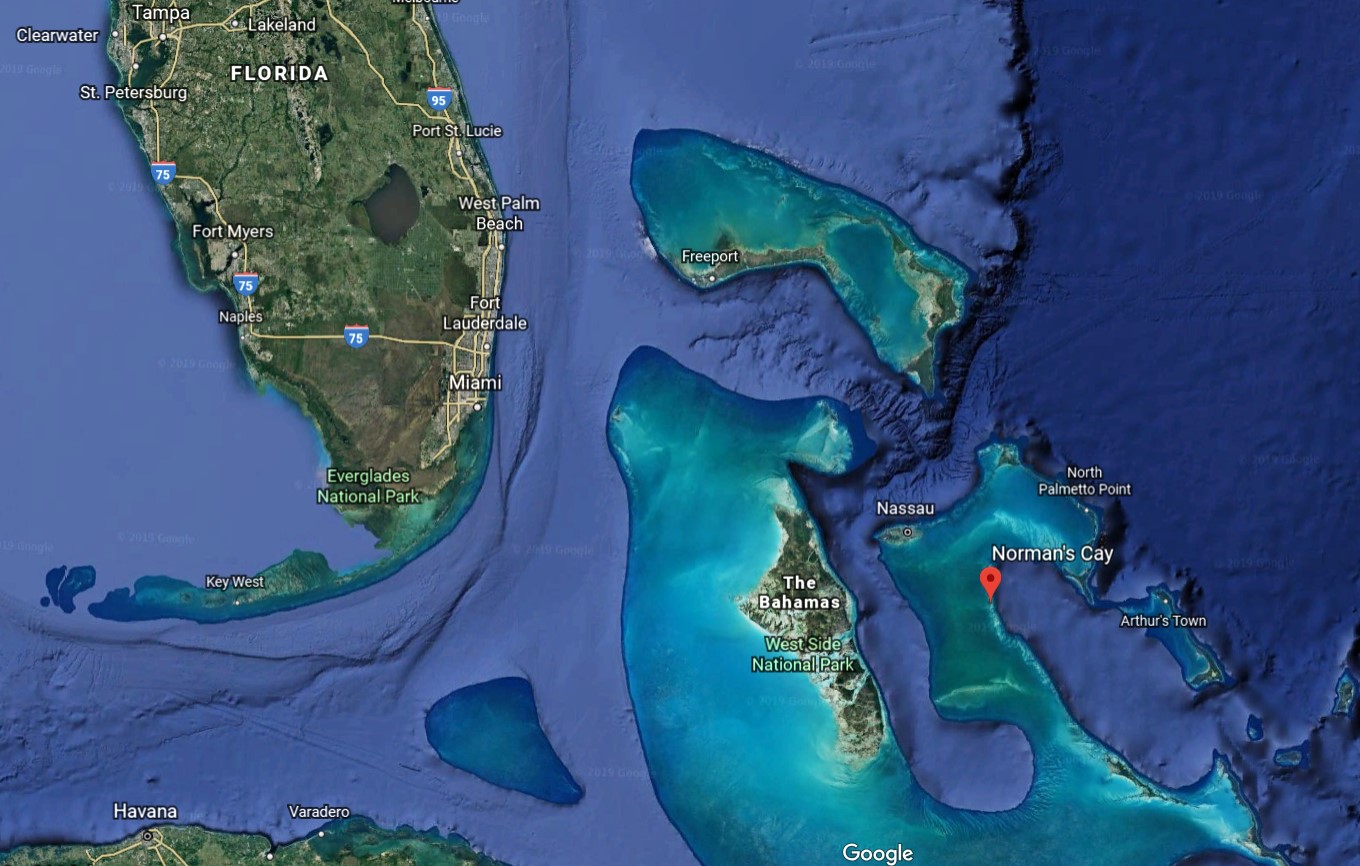 The Bahamian islands have a rich history as a key location for smuggling. In the 1600 and 1700s, during the height of the British Empire, these waters were frequented by pirates and marauders looking to intercept ships from the East India Company. During the American Prohibition era, smugglers kept warehouses on these islands to bring alcohol into southern Florida.

Significance of Norman’s Cay in the Drug Trade

Cocaine-related operations on this island were primarily a venture of Carlos Lehder, a prominent member of the Medellin Cartel.

Norman’s Cay served as a strategic location to transport large amounts of cocaine from Colombia into the United States. The small aircrafts used by the Medellin Cartel were not equipped to safely make the journey from Colombia to the United States without stopping. So, Lehder used Norman’s Cay as a hub in which planes could refuel before entering the U.S. His goal was to set up a base that was easy flying distance to and from Florida, but remote enough to be bypassed on the radars of the authorities.

Who is Carlos Lehder?

Lehder, known as “Crazy Carlos,” was a German-Colombian kingpin who worked in connection with Escobar during the heyday of the Medellin Cartel. For several years, Lehder was George Jung’s business partner. This relationship is depicted in Blow, Ted Demme’s biopic of Jung starring Johnny Depp.

Lehder had an odd fascination with John Lennon and Adolf Hitler (interesting combo). He was an outspoken Holocaust denier and stout anti-Semite, considering Hitler to be a genius. For real, this guy was bananas!

Currently, he is serving life in prison in the United States without the possibility of parole.

Before Lehder arrived in 1978, Norman’s Cay was a VERY private resort destination. There was a small residential community with a marina and a clubhouse. Excursions to this island were mainly restricted to the extremely wealthy – as you needed a Yacht or small plane to access it.

Due to the island being surrounded by sharks, Norman’s Cay never really established itself as a tourist hot spot. Essentially, Norman’s Cay was a low-key island of little significance to the rest of the world, which was exactly what Lehder had in mind for the headquarters of his empire.

How Did Lehder Take Over Norman’s Cay?

When Lehder landed on the island in 1978, he introduced himself as an island developer named “Joe Lehder.” Immediately upon his arrival, Lehder began buying up as much property as he could. In addition to a gorgeous beachfront estate, he built a 1,000-meter long runway, plane hangars, installed a radar, and brought in armed guards and attack dogs to patrol the beaches protecting his cargo. Any pilot (other than Lehder’s drug smugglers) who tried to land on the island was promptly shooed off by the guards.

Lehder paid the Bahamian government to turn a blind eye to his drug smuggling activities. In fact, Prime Minister Lynden Pindling was known to have visited the island several times during Lehder’s reign of terror.

With the Bahamian government in his back pocket, Lehder basically had full control over Norman’s Cay. His goal was to chase out the current inhabitants and make the island the home of his cocaine empire. Lehder brought in a large crew of menacing Germans armed to the teeth and would make offers to buy out his neighbors’ properties, which many obliged to avoid any trouble.

For those who did not initially want to sell their property, Lehder would carry out a number of devious tasks in an effort to scare them into selling. Some residents would come to the docks to find the lines to their boats mysteriously cut, or the water in their cisterns would be tainted.

There was one instance in which a resident found his dog floating in his cistern.

Perhaps the defining moment when the residents knew the island was no longer safe was when a body was found mysteriously murdered on a yacht. At this point, Lehder had total control over Norman’s Cay.

There was, however, one man who stayed defiant against Lehder. Richard E. Novak, a marine biologist studying the sea life around Norman’s Cay, refused to be intimidated by Lehder’s reign of terror on the island. Initially, Novak and Lehder were pals. Lehder even went as far as planning to build a marine research center on the island – of which Novak would be the head of.

But, as cocaine operations increased on the island, it was clear to Novak that something wasn’t right and he went to the Bahamian police. This is when things took a nasty turn, as Lehder began to use his thug-like intimidation tactics to get rid of Novak. One instance resulted in Novak getting stabbed in the back with broken glass, nearly leaving him paralyzed.

When the local authorities did nothing, Novak took matters into his own hands. He began spying on Lehder and his operations. He took pictures, wrote down plane numbers, put sand in the plane gas tanks, and on some occasions, he gave Lehder a taste of his own medicine.

Ultimately, Novak wasn’t able to get Lehder off the island himself, but he came to Lehder’s trial in the United States in 1987. If you want to read more about Novak’s battle against Lehder, the book “Turning The Tide: One Man Against The Medellin Cartel” is a great read!

At the height of Lehder’s power on Norman’s Cay, there were thousands of kilos of cocaine moving in and out of the island every day with profit margins in the millions. Court papers stated that Lehder was earning between $250 – $300 million annually when operations were at their peak!

Crazy Carlos wasn’t just known for his illicit business mind; his notorious parties on the island were that of legend – which is probably what the Fyre Festival organizers had in mind when they were visualizing the event.

As Lehder’s drug addiction worsened and his power rose, so did his delusion. Even with his exponential earnings from the drug trade, he spent hours upon hours planning a Nazi-rooted political takeover of the Colombian presidency. At this point, Lehder’s erratic behavior was sending up alarms to his colleagues in the Medellin Cartel.

In addition to his neo-Nazi ramblings, Lehder was getting exceedingly cocky with his cocaine operations. It was completely obvious that Lehder was a ruthless drug lord, not the island-loving developer he said he was. Lehder would even go as far as taunting the authorities by dropping leaflets over the Bahamas reading, “Go Home DEA.”

In the early 1980s, it became abundantly clear to Escobar and the rest of the Medellin Cartel that Lehder was an unhinged lunatic. As they distanced themselves from Crazy Carlos, it was only a matter of time before the drug empire on Norman’s Cay came crashing down.

Under serious pressure from United States law enforcement, the Bahamian government was forced to crack down on the drug-related activities taking place on Norman’s Cay. As the authorities closed in, Lehder set his home on fire, along with everything else related to the cocaine trade and fled to the jungles of South America.

For more awesome photos depicting the remnants of Lehder’s empire on Norman’s Cay, check out this page.

Here is a walk-through video of the remains of Lehder’s villa – courtesy of Kerry Pulliam.

As much as I loved the Fyre Festival documentaries, they didn’t go into much historical detail about the original event location. Hopefully, this article has provided some more information about the wild, drug-fueled chapter in this paradisiacal island’s history.

Kevin is a proud Southern California transplant from the Midwest. His love of travel and writing was the inspiration to create Impulsive Wanderlust. From 9 to 5, Kevin works in marketing as a senior copywriter and content strategist. When he isn’t writing or traveling, Kevin is either rock climbing, hanging out at the beach, or seeking out his next favorite craft beer.

5 Important Things to Know for Your First Trip to the U.K.

All You Need to Know Before Planning a Trip to Austria